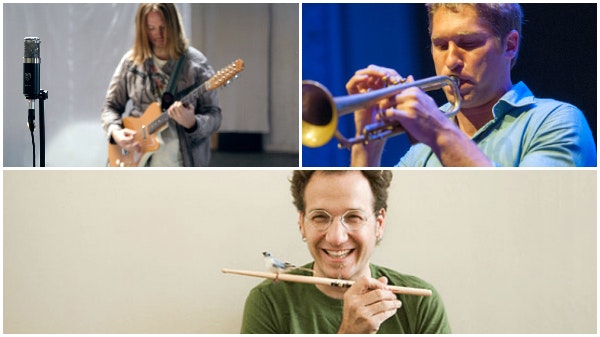 Palm Arts is proud to present Invisible Bird Jazz Trio in the intimate Black Box Theatre in the Palm Theatre complex June 15th and 16th at 7:30pm. Invisible Bird  is a collective Jazz super-group formed in Denver, CO comprised of Scott Amendola, Dave Devine, and Shane Endsley. In addition to the performances in the Black Box the group will be giving a master class on Saturday June 16th at 1:00pm. The class is open to the public with a registration fee. Each member of this collaboration has their own extensive resumes but just a few of their performance credits are listed below:

Dave Devine: has recorded/performed with artists ranging from Art Lande, Ron Miles & Matt Wilson to Sun Kil Moon & the Czars. Devine is ever-present in both the Denver Rock & Jazz scenes as a leader with his band Relay as well as the Dave Devine Trio.

Shane Endsley: is a Denver native and member of the Grammy-nominated group Kneebody in addition to his work with Donny McCaslin, Steve Coleman, Slavic Soul Party, Ani DiFranco & as a leader. Shane is lauded by both DownBeat & JazzTimes as one fo the most creative trumpeters of his generation.